Secret papers hidden in archives for years clearly show that when medical researchers applied for funding to study the link between vaccinations and the debilitating condition known as ME/CFS in more detail, their applications were turned down in favor of psychiatric research, which was said to be preferable.

For many years, researchers and medical professionals have suspected that there could be a link between vaccinations and ME/CFS. This has been difficult to prove because much of the evidence supporting the ME/CFS/vaccination link has either been suppressed or ignored for a variety of reasons.

Before exposing secret documents that have been hidden from the public view since the 1990’s, I will explain what is meant by the term ME/CFS.

WHAT IS ME? WHAT IS CFS?

Try to imagine that you have been to bed after a long day at the gym and you wake up with all your muscles sore and achy. That is how a sufferer with the condition myalgic encephalomyelitis (ME) feels every day. Every single movement becomes painful and requires a massive amount of effort.

Chronic Fatigue Syndrome (CFS) is a condition where the patient suffers from total, utter exhaustion. However, unlike normal exhaustion, which can be overcome after a good night’s sleep, CFS does not improve with sleep or rest. [1]

According to one website, “several countries currently call the condition myalgic encephalomyelitis, ME/CFS or CFS/ME with some experts preferring to use the terms interchangeably, while others consider one a subgroup of the other.

In the United States, advocates are working to have the name of CFS officially changed to ME/CFS due to the widespread belief that the name CFS trivializes the condition and leads to misperceptions of it. Disagreement over whether encephalomyelitis or encephalopathy is more accurate led to the decision to push for the simple acronym ME.

CFS/ME affects people in different ways.  No two people experience the illness in the same way.  Anyone at any age can be affected. Sufferers often endure severe and debilitating fatigue, painful muscles and joints, disordered sleep, and gastric disturbances.  Poor memory and concentration are commonplace. In many cases, onset is linked to a viral infection.  Other triggers may include an operation or an accident, although some people experience a slow, insidious onset. [3]

According to paperwork supplied to me by an interested party, grants have been denied to researchers studying a possible link between vaccinations and ME/CFS. The documents were only discovered when they became the subject of a Freedom of Information request.

(It is interesting to note that every document carries a stamp saying ‘closed until 2071.’)

In 1992, Doris Jones, a postgraduate medical research student, applied for funding from the Medical Research Centre (MRC) to research what she believed to be the link between vaccinations, antibiotics and the subsequent development of ME/CFS.

On May 25, 1992, Jones wrote a letter to Dr. Peter Dukes of the MRC, stating how a Ciba (Ciba Geigy Corporation, a Swiss pharmaceutical company now owned by Novartis) open meeting that she attended had been a unique experience for her. She explained that although she did not belong to the medical profession and was not affiliated with any patient organizations, she was studying the subject of ME/CFS for her postgraduate degree.

She described how shocked she was that there had been what she described as “a huge chasm between how the illness was perceived by general practitioners and psychiatrists compared to how it affects sufferers in real life and what its true nature may turn out to be.”

Ms. Jones described in depth a comprehensive, multifactorial, epidemiological research project that she had recently completed on ME/CFS. Enclosing the abstract for Dr. Dukes to read, she wrote:

“You will note that details on associated factors like vaccinations, antibiotics and allergies may be especially relevant, as may those on diet, stress and earlier infections. It is disconcerting that some of these associated factors can also be seen in certain apparently healthy subjects, notably in normal students, which seems to coincide with concurrent emergence of similar symptomatology.”

She backed up her theories with references to other published research, in particular the work of Professor Behan.  She enclosed one of his papers for Dukes to read. She wrote:

“Indeed one of Professor Behan’s teams recently identified sequences of an enterovirus which were identical to the polio vaccine virus in a proportion of carefully selected PVPS patients.”

Jones offered various other examples of carefully researched material to support her claims, mentioning various vaccinations and antibiotics as possible triggers to ME/CFS.

Although Jones appeared to supply the MRC with sufficient documented evidence for funding to be granted, she was turned down in favor of other research projects that supplied less evidence to support their application.

At the time of her application, ME/CFS was being portrayed as a psychiatric disorder and Jones wished to dispel this myth, proving that ME/CFS was in fact a physical disorder caused by vaccinations, in particular the tetanus vaccination and/or antibiotics.

It is interesting to note that Ms. Jones may have hit the nail well and truly on the head as to why she was refused funding, when she innocently wrote:

“You may agree that in the circumstances an in depth large-scale epidemiological research project into the disorder would seem advisable. Whilst possible consequences for the pharmaceutical industry need to be considered of course, these surely should be offset against not only an incalculable amount of perhaps unnecessary human suffering, but also against what may be a rapidly growing number of middle-aged or even quite young incapacitated, perhaps permanently disabled and STATE BENEFIT Dependent subjects!” (emphasis added)

The documents demonstrate evidence of how various discussions between Ms. Jones and the MRC grew quite heated, especially when it appears the MRC did not seem the slightest bit interested in supporting Jones’s application, advising her instead to apply to a charity for funding!

Was it because research into vaccinations and antibiotics is financially beneficial to the pharmaceutical industry and therefore, not a viable option for research? It certainly appears that way when reading the supplied document.

On December 22, 1992, the MRC wrote to Jones, seemingly rebutting her suggestion that it was because she was studying vaccinations as a trigger for ME/CFS that they were refusing her application. They claimed that it was more to do with the fact that she was not “competitive,” stating:

“You suggest that there may be a link between vaccinations and ME. The sequelae of immunisation in general is of an area in which the Health Departments in particular have a special interest. The problem is to establish the specificity of that link to CFS.  I can however assure you that the MRC is certainly not reluctant to support research or any other area that may be related to CFS, as long as it is competitive.” (emphasis added)

It appears from reading the documentation that instead of researching a wide range of possible causes, the MRC continually favored research undertaken by the Institute of Psychiatry, stating this fact in at least three documents.

“As you suggest, the council does fund work on CFS at the Institute of Psychiatry, an institution with a distinguished record of research spanning disciplines such as neurology and neuropathology and not only psychiatry. The project you may be referring to is entitled “An Epidemiological Approach to the Study of Chronic Fatigue Syndrome.”

It was later revealed that the MRC had given the Institute of Psychiatry £91,000 to fund research. In a 1995 letter to a Ms. Heather White, Department of Health, they wrote:

“The investigators planned to study the prevalence of CFS amongst consecutive general practice attenders aged 18-45, together with exploration of associated demographic, clinical and psychosocial variables. In addition, they planned to identify patients suffering from prolonged fatigue following viral infections and determine how many met a case definition of CFS. We have not yet received a final report detailing the findings of the study.

I should point out that we receive very few grant applications concerning CFS and apart from the epidemiological study mentioned above, none have been of sufficiently high scientific quality to merit funding.” (emphasis added)

Obviously researching vaccinations and antibiotics as a possible trigger of ME/CFS was not scientific enough to meet the ‘high standards’ required by the MRC. It is a real shame that the MRC did not realize Doris Jones’s true potential, as she went on to gain a Master of Science degree and publish a selection of papers on the subject. One of her papers titled ‘ME and Vaccinations’ [4] was published in 1997 and read:

“Cases where ME subjects had been vaccinated in the month before developing an infection and/or other health problems which resulted in ME, attracted my particular attention; in some instances there were no infections – an immunization alone seemed to have triggered the onset of ME. There was also a small group who informed me they had received long term corticosteroid treatment for health problems before receiving a vaccination which triggered their illness. Significantly perhaps, adverse reactions to vaccines, drugs as well as sensitivities to chemicals and foods were reported with almost predictable regularity. Results of my study were first shown at the International Conference on Chronic Fatigue Syndrome, Dublin, in 1994.”

By cherry picking their research preferences, the MRC has potentially condemned many to suffer a life blighted by this tragic condition. Instead of funding studies researching a variety of possible causes, it appears the MRC only choose to fund the ‘it’s all in the head’ theories drummed up by psychiatrists only interested in lining their own pockets. It is a pity they have such a closed view when handing out financial support. How can we ever learn more about this debilitating disorder when research is being suppressed in this appalling manor?

[contentbox headline=”Copyright Notice” type=”info”] We are publishing this information to educate Congress, the media, and public regarding issues affecting the health and well-being of our citizens. It is not our intention to infringe upon anyone’s copyright. We believe we have used the U.S. Copyright’s Doctrine of Fair Use equitably and without incurring infringement or plagiarism. 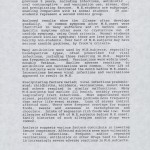 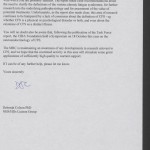